18 Best Things to Do & Places to Visit in Isfahan

There is an old Persian saying that goes, “Isfahan nesf-e jahan”, which means that Isfahan is half the world. During my countless visit to this magnificent city in central Iran, I slowly unravelled its layers to better grasp this rhyming proverb. I delved into the palaces, mosques, bridges and gardens, and then I explored some more. After all the hours spent uncovering the city, I could more or less narrate a rather comprehensive – though not exhaustive – list of things to do in the city of Isfahan.
Here we go:

1. Wander all the corners of Naqsh-e-Jahan Square

A massive public space in the centre of Isfahan, Naqsh-e-Jahan Square, also known as Imam Square, is a fine example of the architectural gems built during the Safavid empire. Tourists congregate at this UNESCO World Heritage Site to see it with their own eyes before zooming it to the attractions that flank each side of the square: Sheikh Lotfollah Mosque, Ali Qapu Palace, Shah Mosque and the Qeysarie Gate, which is the main portal to the bazaar of Isfahan. Take your time to visit each of these attractions and devour the history behind them.

2. Take a breath and have a picnic in the square

Don’t rush in and out of Naqsh-e-Jahan Square. Instead, slow things down and have a seat on the grassy lawn where you’ll find locals having picnics with their friends or families. You’ll hear the sounds of laughter and children playing, and the clear jingle of the horse-drawn carriages that take tourists around the square.

3. Go shopping at the Grand Bazaar of Isfahan

Walk the circumference of Naqsh-e-Jahan Square through the bazaar and then from the Qeysarie Gate, disappear into the labyrinth that is the Grand Bazaar of Isfahan. Underneath its arched ceilings and domes you’ll find handicrafts, carpets, spices, clothes, and so much more. This covered bazaar, which was originally constructed in the 11th century, stretches all the way to Jameh Mosque.

4. Walk through time in Jameh Mosque

During my visit to Jameh Mosque, I had the sense of walking through time – and quite rightfully so, as this mosque underwent gradual changes from the 8th century to the end of the 20th century. Given the nature of its construction, with additions and remodelling throughout different dynasties, the mosque has varied styles in different areas. The result is a unique concoction of Iranian architecture under one roof – or rather, under four “iwans” (prayer halls).

At the northwest of Jameh Mosque is Majlesi Tomb, a mausoleum dedicated to Mohammad-Baqer Majlesi, a renowned and influential Twelver Shi’a cleric during the Safavid Era. He is most well-known for his compilation of an encyclopedia of Hadiths (records detailing the life of the Islamic prophet Muhammad and the twelve Imams) that amounts to 110 volumes. During my visit on a Friday afternoon, the mausoleum was filled with chador-clad women, some sitting on the ground reading religious texts and others surrounding the tomb to put their hands on it.

A stone’s throw away from Naqsh-e-Jahan Square is Chehel Sotoun Palace, which has been graced by royals and dignitaries since the 1600s. Built by Shah Abbas II as a site for entertainment and for receiving important guests, Chehel Sotoun Palace is recognisable by its 20 slender wooden columns that support the entrance pavilion. Its name which means “40 columns” is inspired by the number of columns seen when the pavilion is reflected on the long pool in front of it.

7. Dangle your feet off Siosepol

From Chehel Sotoun Palace, walk south down Chahar Bagh e Abbasi Street and you’ll eventually reach Siosepol. While the bridge spans the Zayandeh River, more often than not these days the riverbed will be dry due to a combination of drought and water extraction. The double-storey Siosepol has 33 arches which you can sit under and dangle your feet. And when the river is dry, it’s safe to explore the lower level too.

Along the same stretch of river lies Khaju Bridge, another fascinating structure that’s built during the reign of Shah Abbas II. In the centre of the bridge, there’s a pavilion where the King himself once sat to enjoy the views. Similar to Siosepol, this bridge has two floors. If you’re lucky during your visit, you’ll chance across locals singing or reciting poetry under the bridge, creating a magical atmosphere.

9. Dine at a traditional restaurant

Turn a simple meal into a dining experience by opting for a traditional restaurant. A stunning place you can pop by is the Traditional Banquet Hall, conveniently located in a courtyard in Naqsh-e-Jahan Square. With stained glass windows, colourful tiles and mirror-decorated ceilings, it’ll be a feast for the eyes as it is for the tummy. A lesser-known option hidden in a quiet part of town, in a historical house itself, is Houger Cafe.
Other beautiful restaurants you can try are Shahrzad Restaurant as well as the restaurants in Toranj Complex, Abbasi Hotel and Malek Soltan Jarchi Bashi. Do note, however, that prices in these touristy spots are rather steep and you’ll be paying more for the ambience than for the food.

While you’re busy discovering the basics of Iranian food such as Ghormeh Sabzi and Gheymeh, don’t forget to actively seek out the foods that are unique to the city you’re in. Traditional foods in Isfahan run in the hundreds, but most of them are homemade and hard for tourists to find. An easy choice, however, is the Beryani, which is minced lamb wrapped in soft bread. You should pair it with a glass of Doogh because salty watery yoghurt goes very well with it. According to my local friends, the best place to have Beryani is Haj Mahmood Beryani Restaurant, but you can also try Azam Beryani or Golestan Beryani.

Hey, who’d have thought you can go cafe-hopping in Iran? Isfahan’s cafe scene is budding and runs the gamut from beautifully-decorated ones to those that simply serve really good tea and cakes. My personal favourite is the cosy little Bahar Narenj Cafe, near the Vank Church, which packs a punch when it comes to jaw-dropping interior. I also love Roozegar Cafe for their traditional design. Another recommendation is Radio Cafe for their yummy croissants and cheesecakes.

There are cafes, and then there are teahouses, also known as chaikhanehs. Iranians pretty much drink tea (or chai) like it’s their national drink and while you can indulge in a piping hot cup of chai in the many cafes around Isfahan, why not head to a traditional Iranian teahouse instead? Azadegan Teahouse, centrally located in Naqsh-e-Jahan Square, is a clutter of lamps, kettle, bells and knick-knacks that literally hang above your head. You can typically have your chai together with “shekar” which is the usual sugar, “ghand” which are sugar cubes, “nabat” which are rock sugar candies, or different types of coin-shaped sweet confectionary to bite before taking a sip.

13. View the sunset from the Fire Temple

Fancy a climb? West of the city centre is the Fire Temple of Isfahan, locally known as “Atashgah”. This archaeological site atop a hill was once a citadel and is believed to have housed Zoroastrian fire temples. There is still a standing circular building constructed with baked brick from which you can sit and take in the views. History aside, this is a great place to catch the sunset. The climb itself, while rather steep, is quite short and you’ll find yourself at the summit within a matter of minutes.

The Armenian quarter of Isfahan is known as Jolfa and it is on the other side of the Zayandeh River from where Naqsh-e-Jahan Square is. This area, which saw settlement in 1606 under the directions of Shah Abbas I, offers a tiny glimpse into the diversity in Iran. Walking around the neighbourhood will bring you to old Armenian churches, old houses and quaint cafes.

15. Marvel at the Vank Church

The Vank Church which sits at the centre of the Jolfa area inspires a sense of wonder with its vivid frescoes and murals depicting biblical stories. Though modest from the outside, it is thoroughly breathtaking from the inside. Pictures and patterns cover every inch of the church and your camera lens won’t be able to capture the grandeur of it… unless if you have a 360-degree camera, that is.

Night or day, you can take a hike up Sofeh Mountain which towers at a height of 590 metres above the ground level. It takes roughly two hours to make it to the top and the route is paved most of the way, safe for the sections further up. The park at the base of the mountain is a popular leisure spot, so if you’re not up for a hike you can also have a picnic or simply take a walk.

If you’ve fallen in love with Iranian cuisine, what better souvenir to bring home than a recipe? Spend one evening in Maryam Persian Cooking Class to whip up delicious dishes like Fasenjun (walnut and pomegranate stew) and Gheymeh Bademjan (eggplant, meat and yellow-split pea stew), and preparing the beloved Tahdig which is rice with a pan-fried layer of potatoes and crust at the bottom. The best part: you get to eat all of that for dinner! P.S. Maryam’s sister, Mahshad, runs the homely Anar Guesthouse which is a great place to experience Iranian hospitality.

18. Make an overnight trip to Varzaneh 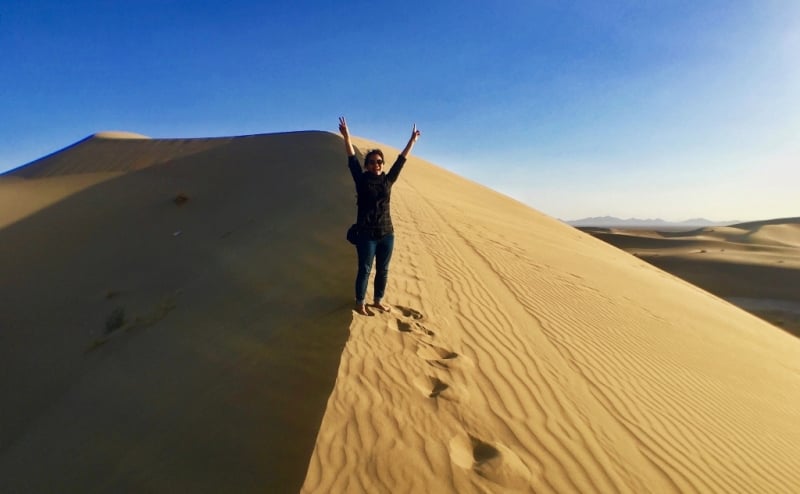 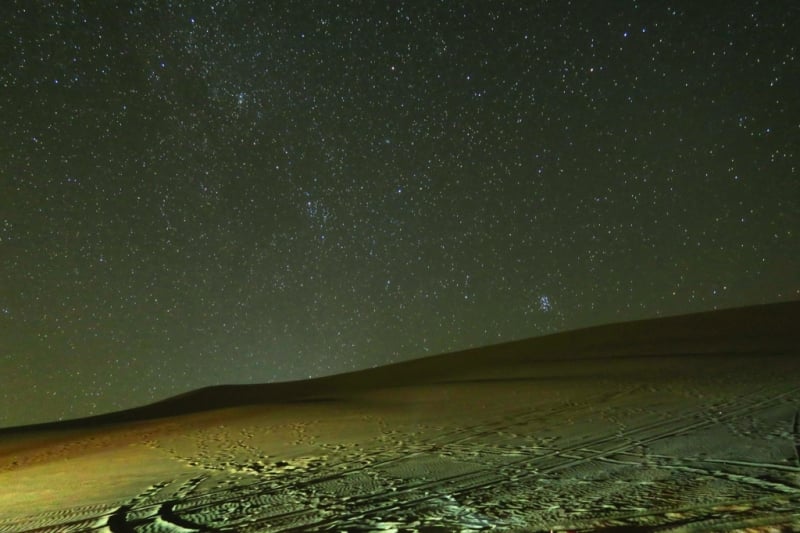 There is no shortage of deserts that travellers can visit in Iran, but if you’re short of time and looking for one that’s conveniently located, Varzaneh is a prime option. It is a two-hour drive from the city centre and has a parking area that doubles up as a camping spot. Alternatively, you can also stay in a guesthouse in Varzaneh itself such as Negaar Traditional Guesthouse (my personal recommendation!) and join a tour to visit the surrounding attractions such as the Varzaneh Salt Lake and other historical sites.

If you’ve completed the list and think you’ve run out of things to do in Isfahan, think again! I once chanced upon a thick book detailing a hundred attractions in Isfahan, complete with beautiful graphics. Too bad I can’t read Farsi. But according to my local friends, these are some other places to check out: Isfahan Music Museum, Angorestan Malek Historic House, Saeb Tomb, Avicenna Tomb, Monar Jonban (Shaking Minarets), Najvan Park (and the Birds Garden, Aquarium and Pigeon Tower nearby) and hey, even the Wall of Kindness where you can make a donation.

See you in Isfahan!

After your visit, you’d have walked the streets of the city that were twice the capital of Persia. You’d have seen the magnificent structures developed by the Seljuk and Safavid rulers. You’d also have experienced first-hand the modern day Isfahan after the last of the Persian monarchy (the Pahlavi dynasty) and the subsequent Iranian Revolution. Hopefully, you’ll come home with tons of stories to tell and a whole bunch of souvenirs as well.

Also read: A Two-Day Isfahan Itinerary For Your First Visit